Einstein’s office on the day of his death. 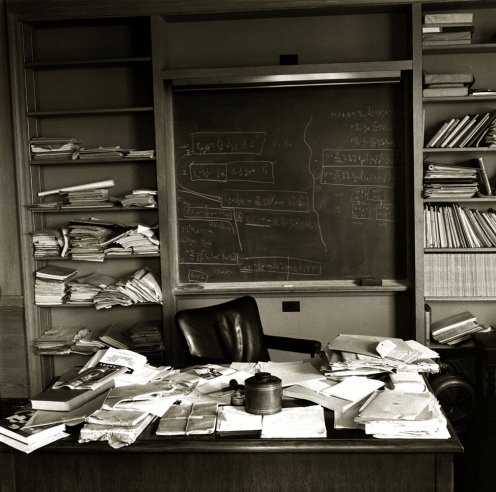 “The death of a public figure of Albert Einstein’s stature is the sort of event that, literally and figuratively, stops the presses. No scientist has been more famous, no antiwar activist’s voice has carried more conviction, no exemplar of genius has ever been as frequently invoked (albeit in language often dripping with sarcasm: “Nice going, Einstein!”) than the German-born father of modern physics. So when word came on a Monday morning in April 1955 that Einstein had died, at age 76, at New Jersey’s Princeton Hospital, the victim of an aortic aneurysm, the scramble was on to recount the story of his life and, as urgently, his death.

LIFE photographer Ralph Morse was among scores of journalists who descended on Princeton that day, hoping to find and report on something, anything, that might offer insight into what Einstein’s passing meant to his friends, family and peers as well as strangers around the world. No one but Morse, however, finagled his way into Einstein’s office. No one but Morse came away with a photograph that, six decades later, serves as a haunting reflection of both the man and his life’s work: a seemingly simple picture of Einstein’s desk, cluttered with notebooks, journals, a pipe, a tobacco tin; behind the desk a blackboard covered with equations and formulas that, to the untrained eye, possess an almost runic power.”

Photograph by Ralph Morse, via LIFE

(Do check out the link – the text above is pulled from that source, which tells the remarkable story of how Ralph managed to get this picture).