It’s been a tough few weeks.

But at least on the science front, I am still hopeful – although that might be because my own personal echo chamber happens to be optimistic in nature. Still, a lot of this has to do with the good work done by many of my science communication colleagues out there. Important, engaging, and often breathtaking efforts that continue to add enormous value to the knowledge ecosystem. The challenge, I suppose (as always) is how to get these pieces to reach outside the proverbial choir. This is a task that probably needs some careful thought and a degree of feistiness to power through, but that’s o.k. – science folks tend to rationalize everything and feistiness is something in high supply right now (myself included).

In any event, I thought I’d take the time to highlight a few of these excellent science communicators: specifically, folks I recently had the privilege of meeting in Massachusetts at the New England Biolab’s campus (this was under the rubric of NEB’s Passion in Science Awards). And while I’m of mind, I should mention that I was really impressed with NEB overall. It sounds like a company that has really worked out its priorities in a responsible way (not just on the work satisfaction piece, but also on the development and environmental front).

Anyway, in this space, I’d like to focus on a couple of these award winners, specifically those that are producing some very cool science media. As this is the internet, I’m only going give you a brief taste of the awesomeness they’re creating (a soundbite really), but would really encourage everyone to explore further.

First up, we have Christine Liu at Berkeley (who, with Tera Johnson, is one half of Two Photon art). Christine is a neuroscience PhD student, who also happens to feel quite strongly about her science communication and art work with “zines.” (according to wiki: that which is most commonly associated with a small-circulation self-published work of original or appropriated texts and images usually reproduced via photocopier).

You would be too, if you checked out her work, and more so, if you chat with her. She envisions it almost like a “movement,” part of the DIY sphere, and possibly even a great pedagogical tool for inquiry base learning (and I would weigh in here with full agreement – in fact, I totally need to follow up, as this dovetails perfectly with some of the hackathon work my lab has been doing). I mean, who doesn’t like zines? And who wouldn’t like zines that talk science? Anyway, do check out, and maybe even buy a few. Her passion is contagious.

Next, we have Dana Simmons, also a PhD student in neuroscience at the University of Chicago. Her photography work is sort of a Venn diagram where neurons, microscopy and Andy Warhol might inhabit. Really lovely stuff and her portfolio is definitely worth checking out.

Scott Chimileski, a post doc at Harvard, is all about the microbes. Well, in many ways, many would argue that the foundational aspects of life is itself pretty much all about the microbes, but Scott has taken this love and melded his photographic prowess in producing some awe inspiring photos. So much so, I think that these wouldn’t seem out of place, if you had Sir David Attenborough narrating about them for the BBC. Many of these photos will also be put to good use for an upcoming exhibit at Harvard’s Museum of Natural History.

We also chatted a little bit about potential collaboration. I’m also hoping that his work could translate well as a microbe deck for the Phylo Trading Card project. Microbes are currently under-represented right now in that game system, and this would be a lovely way to bring more of this form of biodiversity into the fold. How cool would the cards look if this became a thing (see below for a few mock ups)? 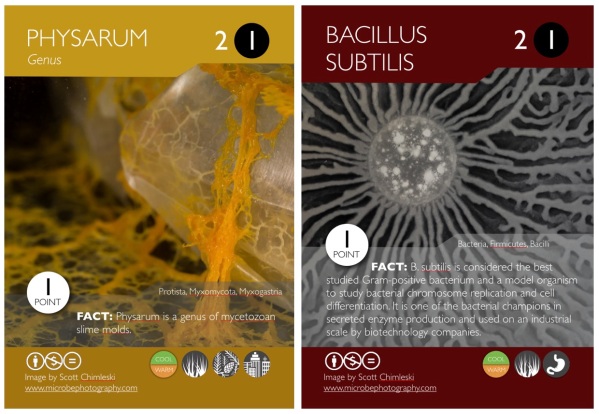 Moving on to the realm of video production, the work of the next three folks would make excellent viewing. I’ve also highlighted an example of each of their work, and I can say that watching these would be a lovely way to spend your time.

We’ll start with Sabah Ul-Hasan, another Doctoral student at UC Merced, who has spearheaded a project that creates documentaries with a mind to spotlight the symbiotic relationship between humans (especially underrepresented communities) and the environment. The project (Biota TV) received Kickstarter funding, and are set to release a few episodes in the future. Here’s a promo to check out.

And who here remembers those Schoolhouse Rock videos? Well, if you’re in the (ahem) older demographic, you might remember them fondly, and can even sing back some of the classic lyrics. In many ways, Wilbur Ryan, from Florida State University, is betting on this infectiousness, as he adapts this flavor of educational videos for content on environmental science (and by way of ECOmotion Studios). I dare you to watch the below video (about Robert T. Paine’s famous intertidal study in 1966) and not be convinced.

Finally, we have Chris Martine, a Botany professor at Bucknell University PA. Someone should give this man a science host gig! (seriously) His videos on botany are brilliant and fun, which I can tell you is a combination that is pretty rare. I’ve highlighted one of the episodes below, but there’s 8 in total (so far) that you can merrily watch (and in the process slowly convert into a plant nerd if you’re not one already).

Actually, Chris and I chatted a fair bit at this event – I think it was partly because we were both folks who were further along their careers than most of the other award winners. But this is what makes it all so hopeful. It was kind of outstanding to see how so many of the award recipients were so young – and already doing amazing things. It certainly makes me feel better about the future.

Anyway, do check out all the award winners (the others that I didn’t get a chance to highlight were all great and largely under the categories for research and/or environmental endeavours). You can see their short presentations by visiting this link here. The trip was really wonderful and invigorating overall (and it was a treat to finally visit Boston). Kudos to NEB for arranging this, and fostering an environment where science communication is valued. It really was much appreciated, and (I think we can all agree) something that is very much needed right now.