Revisiting the Nagoya (Biodiversity) Conference: With References to Star Wars

(Originally published at Boingboing.net in 2010, a few months before the actual Nagoya COP10 conference.  It’s also a general primer on how the United Nations do these sorts of things)

So what is up with this Nagoya thing? Well, it’s a big international meeting that is happening in Nagoya’s Congress Centre (see the picture above), starting on October 18th and lasting until the 29th. No doubt, you weren’t necessarily lured into finding out more by the conference’s bouncy theme song. You certainly weren’t intrigued by the reams ofofficial documents, frequently released, yet all stoically written.

The problem is, is that there is a lot of jargon in how all these meetings go down. You have a “Conference of the Parties” (or COP), you have “Conventions,” and you have “Secretariats.” I chose not to mention the “Subsidiary Body” part, because I believe that would have formally made the previous sentence the most boring in the universe. And as if that wasn’t bad enough, a lot of these documents have been written in a painful policy speak/legalese type of language, seemingly in an effort to make readers endorse the extinction of the writers responsible. Worse still, Nagoya isn’t getting a ton of media coverage, and that means you don’t tend to have needed public commentary like you did with similar recent outings (for instance, Copenhagen comes to mind).

Lucky for us, there seems to be a lot of similarities between these United Nations’ affairs and how planetary politics appear to be run in the world of Star Wars. In any event, the similarities are good enough to warrant having a go at bridging the two. This might be simplifying things a bit, but the analogy would basically work a little like this…

Convention (and specifically the Convention on Biological Diversity): I’ll write more on this later, but the CBD is what all the fuss in Nagoya will be about. It’s essentially an international agreement currently supported by a whole bunch of countries, which is basically up for review as well as a reboot. Also, because it’s classified as a “Convention” this agreement is bound by international law. It’s not like participating in a vote where the majority wins – you’re either in or you’re out. The goal, of course, is to come up with a document that everyone, or at least, almost everyone, is good with – understandably, not an easy thing to do. In Star Wars, this would be analogous to some sort of galactic treaty being mulled over (except that obviously the words galactic treaty are way cooler thanconvention).

Conference of the Parties (COP): This is a collective term for all the countries who are technically already “on board” with the Convention – this has a variety of meanings including the act of signing the convention, and then managing to get your national governments to back it up (this would technically be called “ratifying” the convention). In all, there are currently 193 countries who are in the Conference of the Parties.” In Star Wars terms, the COP would be analogous to all of the members of the Galactic Republic who have agreed to follow the laws bound to said galactic treaty.

Secretariat: In UN affairs, the term Secretariat more or less refers to a smaller group of individuals who comprise the administrative core of a particular department or convention. This sounds very close in structure to the role of the Galactic Senate. You might also remember that in Star wars, there was a Supreme Chancellor, who headed this Secretariat. In the CBD’s case, this would be the Executive-Secretary, a fellow by the name of Ahmed Djoghlaf.

Nagoya-COP10? In Star Wars, the movies anyway, a lot of the political stuff happens in that great big black room with all of the fancy floating balconies. This was the Senate Building on the planet Coruscant, which to me, is a little like the General Assembly hall in the United Nations New York headquarters. However, for these sorts of Convention meetings, (this being the tenth one for this particular COP – hence it being called “COP10”), they tend to get held in big conference centers, and in suspiciously nice locales. In other words, for our Star Wars analogy, the members of the Galactic Republic involved in the treaty probably wouldn’t meet in Coruscant: instead, they would find another host planet. As well, it would be unlikely for such an analogous meeting to be held at a place like Hoth(too cold) or Tatooine (too dusty), but rather a planet like Alderaan (before it was destroyed anyway) or Naboo, since both are apparently beautiful.

SBSTTA: Of course, throughout all of this, you’re probably wondering where the Jedi fit in. In Star Wars, members of the Jedi Order were essentially “keepers of the peace in the Republic.” Furthermore, the Jedi Council was often key in providing objective information and advice. This means that they were valued for being a source of knowledge and wisdom, and also a sort of a police force to ensure that folks follow the laws of the treaty. In our Convention on Biological Diversity context, there is something known as the SBSTTA (which unfortunately is not a droid name but a busy mess of an acronym for “Subsidiary Body on Scientific, Technical and Technological Advice.”) This, I guess, can be thought of as a group of “Jedi except without lightsabers plus no cool special powers.” In other words, while this SBSTTA aims to play an objective advisory role, in particular, helping the COP on the scientific and technological nuances of biodiversity, they have no part what-so-ever in enforcing the convention itself. Kind of like a bunch of Jedi’s who will tell you their expert opinion on the issues being discussed, but are unfortunately incapable of kicking ass on members who choose to disregard intergalactic law. This is actually one of the big problems in these international environmental treaties – there isn’t really a decent mechanism in getting COP members to follow through.

It’s also worth noting that the SBSTTA is analogous to what the IPCC (Intergovernmental Panel on Climate Change) does in Climate Change matters, except in a much smaller and some say slighter way (more on this later).

The Emperor? In Star Wars, this was of note, being the bit about the Senator and then Supreme Chancellor Palpatine managing to scheme his way into creating the Galactic Empire. In the CBD world, there really isn’t such a person or country member in the COP, but there are factors where different countries have different influences. Probably the best example is to think of something like the Trade Federation in Star Wars. This was an alliance based on economical clout – somewhat similar to how one might view the countries of the G8 or G20 these days. As well, you can imagine that countries in less fortuitous economic standings (i.e. developing countries) have an interest in making decisions together, which is what does happen in these affairs. As a side bar, I should note that, ironically, the Nagoya conference does “technically” have an Emperor involved – this would be Emperor Akihito, the head of the Japanese Imperial Family and monarch of the host country.

Anyway, this should set the scene a bit. Later on, I’ll write a primer on what the actual Convention on Biological Diversity is all about, how it currently kind of sucks, and why this meeting in Nagoya in particular is very very important. 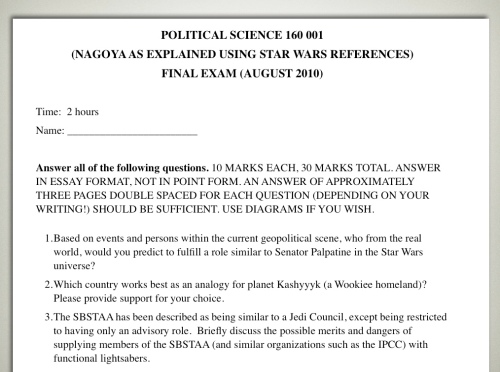