Sciencegeek Fundamentals #4: In which a puzzle is not a puzzle, and instead illustrates scientific revolutions.

About five years ago, a colleague (Ben Cohen) and I decided to conduct a little online experiment. Essentially, we thought it would be fun to host a puzzle.  This would involve the sequential release of some fairly bizarre pictures. The goal, of course, was to see if we could entice the denizens of the internet to play along – in other words, could they figure out what was the unifying connection between all of these strange things that they were seeing?

The formal start to this process involved the presentation of three images (shown above). This included: (1) a gorgeous picture of a fish, specifically one drawn by Ernst Haekel; (2) a picture of a robot masquerading as a cow masquerading as commentary on industry; and (3) the front cover of an Elvis Presley VHS tape (remember those?) called “It Happened at the World’s Fair.” We then gave this whole exercise the snazzy title, PUZZLE FANTASTICA, which was the sort of thing that precariously walked that strange line where it was simultaneously awesome and stupid. Next, we added the tag line, “Do not click unless you are of reasonable intelligence,” and then we basically just sat back and waited [1].

What happened next was pretty amazing. Immediately, we got a lot of feedback and a lot of attempts at solving the puzzle. And, I should add, a lot of it was very sophisticated and, well, remarkable. But despite this ingenuity from our readers, Puzzle Fantastica did not get solved.

And so, we released another clue… and then another. The fourth clue was a short movie of someone’s lawn covered with a few of those plastic climbing things that one purchases for small children, as well as about 100 European Starlings mulling through that same patch of grass. The fifth was some text, about a hundred words, which read as if it was the start of a strange children’s novel.

For each of these new clues, we saw new wonderful attempts at solving the puzzle, which interestingly enough, were often modifications of previous attempts. We also saw a huge increase in the number of participants, significantly fueled by traffic from other websites [2]. By the end of the exercise, we had managed to court several hundred different answers for our puzzle. However, despite this outpouring, none of these fine attempts had found the “official” answer.

Still, we were so impressed with the effort and the diversity of what we saw, that we made a fancy graphic of the totality of solutions presented to us.

As well, at the time, Ben and I were a little worried. When all was said and done, we realized that when we put up our “solution” (a play on the word CLONE), we would also need to recognize the fact that many of the readers’ answers were far more elegant. 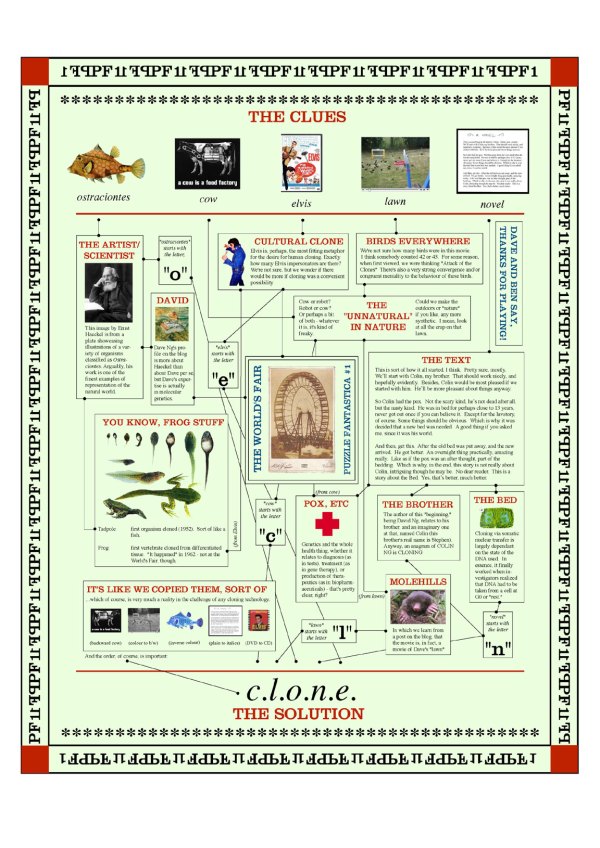 Still, the whole process was sublimed. It was in many ways, a microcosm of the scientific method in action. What happened was that folks “saw something interesting” (our clues), and then they tried to fathom from these observations, a reasonable “reason why?” In other words, they were coming up with hypotheses: and their manner of testing them was waiting to see if the next clue would support or contest them. The participation was truly brilliant, and it was a testament to how creative a person’s mind can be, when driven to the prospect of trying to understand something mysterious. It was also turning into a great analogy that we could use for teaching purposes: “Look, it’s like the scientific method!” we both said.

Except that the analogy had one completely mind boggling, over-the-top, truly delicous kink, which actually made it all the more richer. You see (and here’s the thing): in truth, there was no solution.

That’s right. The whole puzzle was, in actual fact, a complete ruse. We were simply interested in seeing how a community can seemingly find wonderfully intelligent ways to connect odd disparate observations. And it worked like a charm. Too well, actually: we hadn’t expected such large numbers of participants which was a little stressful and also the reason why we decided to fabricate a answer that fitted but also one that hadn’t already been mentioned. It was as if we were forcing ourselves into a paradigm of sorts.

Which is fitting given what paradigms are in the world of scientific discourse. Here, Thomas Kuhn, the American Historian and Science Philosopher, famous for the publication of “The Structure of Scientific Revolutions,” says it best. He wrote that science “is a series of peaceful interludes punctuated by intellectually violent revolutions.” Furthermore, it is during those revolutions where, “one conceptual world view is replaced by another.”

What he was referring to was the idea that scientific discovery tends to work within paradigms. This is where there is an existing framework of knowledge that comfortably guides how observations are made, questions are asked, and how hypotheses are formed. However, history has also shown that on very rare occasions, these paradigms can change, and because they are so fundamental, such change can seriously rock the boat. We’re talking the Sun being at the center of the Solar System not the Earth; Einstein’s work on relativity over Newtonian physics; Darwin’s Natural Selection over all of that God stuff.

Our Puzzle Fantastica, admittedly by accident, actually illustrated how consequential a paradigm shift can be. In that our participants would have obviously acted in a completely different manner and would have provided completely different responses, had they known that there was never an answer in the first place. That particular change in our framework of knowledge for the puzzle was, suffice to say, revolutionary.

I bring this up, because it is yet another part of the scientific method.  It is in many ways, the ultimate example of why Popper’s “You can’t ever prove the Truth” statement is so important.  You just never know. Paradigm changes are actually implied with our scientific method flowchart, except without the intensity.  In fact, it might be worth changing our flowchart to reflect this:

(* these grey bits refer to this paradigm business).

So there you have it:  The scientific method in all of its glory.  Although, hopefully, after reading through this material, you realize that this flowchart is still a gross simplification.  Indeed, there are many who would prefer we not even call it the Scientific Method anymore. Instead, we should refer to it as the Scientific Process [3], as a way to highlight its fluidity and nuances, and that the flowchart should probably look a lot more busy and complicated with many criss crossing lines.

I personally like all of these , with maybe a secret desire to introducing a new term, Modern Baconian Method [4] – but that is just me.  What might be most important from of all of this, is to just “get it.”  It is just for everyone to have a certain degree of familiarity on how science can provide us with knowledge, and how that knowledge came to be.

Why?  Because when you do, you’ll finally understand why the usual way we get our scientific information – that is, television, newspapers, the web and the like – is often completely fucked up.

NOTES
[1] Puzzle Fantastica #1: “Fish-Cow-Elvis” [do not click unless you are of reasonable intelligence]. Scienceblogs.com. (Assessed January 7th, 2012)

[4]  The Baconian Method, referred to earlier in part 1, is described here.

3 Comments to “Sciencegeek Fundamentals #4: In which a puzzle is not a puzzle, and instead illustrates scientific revolutions.”

Leave a Reply to Sciencegeek Fundamentals #2: In Which We Learn That the Alien Hypothesis is Worthy, Though Not Necessarily Valid. « Cancel reply