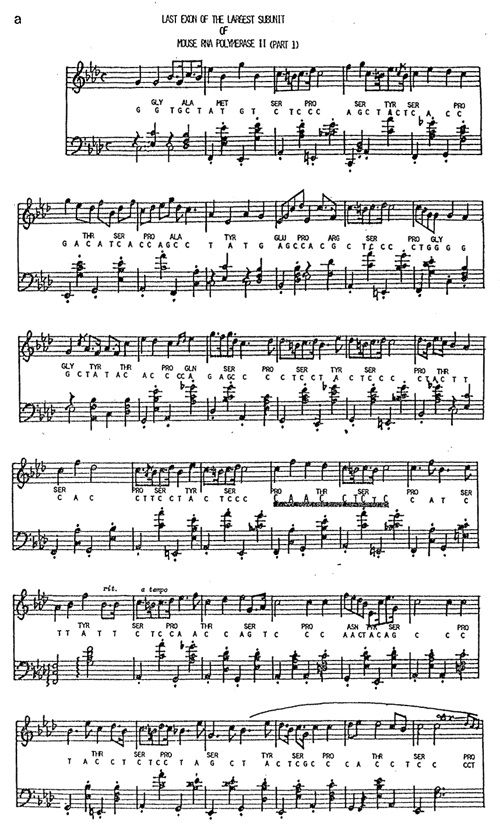 This lovely piece of music is actually reprinted from a wonderful paper entitled “The all pervasive principle of repetitious recurrence governs not only coding sequence construction but also human endeavor in musical composition” (link to pubmed abstract page) and the above image is a figure depicting musical notation as translated from the last exon of the largest subunit of mouse RNA polymerase II. As if this isn’t delicious enough, the article goes on to show that the musical piece shows strong similarities to Chopin’s Noturne OP55. No. 1.

The principle author* Sosumu Ohno begins the paper with an awesome beginning. He writes:

“Whereas ordinary mortals are content to mimic others, creative geniuses are condemned to plagiarize themselves” is my shorter, albeit inarticulate, version of what Van Veen said in Ada by Vladimir Nobokov. Indeed, it seems that vaunted geniuses seldom invented more than one modus operandi during their lifetimes, and even civilization has largely been dependant upon plagiarizing a small number of creative works; e.g. the multitudes of Gothic churches can be viewed as pan European plagiarism of the abbey church of St. Denis and/or the cathedral at Sens. This is not surprising for new genes sensu stricto hae seldom been invented. Evolution rather relies on plagiarizing an old and tested theme…”

And then continues to make a case for great works (musical composition) to be inherently derived from DNA coding sequence.

I often use this paper in a little game I play in class called “Is this real?” and this paper in particular has been the cause of much controversy over the years. Ohno, himself, was a celebrated geneticist with many accomplishments, perhaps the most famous of which was being one of the first to notice that one of the two X chromosomes, in females, existed in a heterochromatin (silenced) form. He was also one of the first geneticists to look into the potential importance of repetitive genetic elements in a genome.

It was from this (and influenced heavily by his wife, Midori) that he developed an interest in expressing DNA code as musical pieces – the obvious advantage being that repetitive elements are likely easier to “hear” than to “see.”

Anyway, a few years back a number of high profile clients cried foul when I had to correct them and tell them that the paper was real, and so I made the additional effort to contact him. Unfortunately, he had just passed away, but the office that looked after his trust wrote back saying “it’s real.” Nice.

For more on Sosumu Ohno, click here for his wiki entry.

*The second author is his wife, the more musically proficient one.