Statement from the Canadian HIV/AIDS Legal Network and the Grandmothers Advocacy Network. (link)

NOVEMBER 28, 2012 – We are profoundly disappointed that Parliament has decided to reject reason and overwhelming evidence by defeating Bill C-398, which would have ensured greater access to affordable medicines for people dying of treatable diseases such as AIDS, malaria and tuberculosis in developing countries. By choosing to believe the blatant lies and misinformation circulating about this bill, MPs who voted against the bill have reneged on Parliament’s earlier pledge and have betrayed people in developing countries — including hundreds of thousands of children — who need medicines to prevent suffering and death, including from AIDS, tuberculosis and malaria.

Bill C-398 would have streamlined Canada’s Access to Medicines Regime (CAMR) by cutting red tape that is wholly unnecessary and proven fatal to the future use of the system. The bill would have made it easier for both developing countries and generic drug manufacturers supplying medicines to use CAMR to help save lives and reduce suffering. A previous iteration of the bill (Bill C-393) was overwhelmingly passed in the House of Commons in the last Parliament — before it died in the Senate with the election call. That bill enjoyed support from members of all parties in the House of Commons, reaffirming that this should be a non-partisan issue. Bill C-398 had the support of medical and legal experts, humanitarian activists, faith leaders, AIDS and international development organizations across the country and health activists around the world. Dozens of prominent Canadians supported the call to action, and 80% of the public supports fixing CAMR according to a national opinion poll.

Bill C-398 reintroduced to the House of Commons the same amendments that very strong majority had already previously endorsed. It was a second chance to finish the job of fixing CAMR and supporting developing countries with needed, lower-cost medicines.

It is a travesty that the Harper Government, having made much of its initiative on maternal and child health, would now turn its back on an opportunity to help people dying of treatable diseases — through a smart policy that that would have cost no taxpayer money and, in fact, would make Canada’s frozen foreign aid dollars even more effective, by harnessing the power of generic competition to get less expensive medicines to developing countries. A government that preaches the virtues of markets and “value for money” chose to disregard both; instead, it prioritized its incorrect reading of World Trade Organization (WTO) rules on protecting patents over a workable mechanism for supplying more affordable, life-saving medicines to developing countries struggling with the ravages of the AIDS pandemic and other public health burdens. This is shamefully callous and a discriminatory double-standard for which those who can least afford it pay the ultimate price.

We wish to thank the many champions of this bill, from all political parties, who took Bill C-398 through the legislative process. The fight is not over. Too much is at stake.

But the bottom line is this: after more than eight years of waiting for Canada to deliver on its pledge to help get more affordable medicines to Africa and other developing countries, the world will still have to wait — and people will die preventable deaths because too many Parliamentarians did not have the courage to do the right thing.

About the Canadian HIV/AIDS Legal Network

The Canadian HIV/AIDS Legal Network (www.aidslaw.ca) promotes the human rights of people living with and vulnerable to HIV/AIDS, in Canada and internationally, through research and analysis, advocacy and litigation, public education and community mobilization. The Legal Network is Canada’s leading advocacy organization working on the legal and human rights issues raised by HIV/AIDS.

About the Grandmothers Advocacy Network

The Grandmothers Advocacy Network (GRAN) is composed of volunteer grandmothers and grand-others from across Canada (http://grandmothersadvocacy.org). We act as a Canadian voice for Africa’s sub-Saharan grandmothers who are caring for millions of children made vulnerable by AIDS. We work for changes in Canadian policies to improve their quality of life.

Tentacles coming from your bathtub.

This would look lovely in any self respecting invertebrate friendly bathroom. 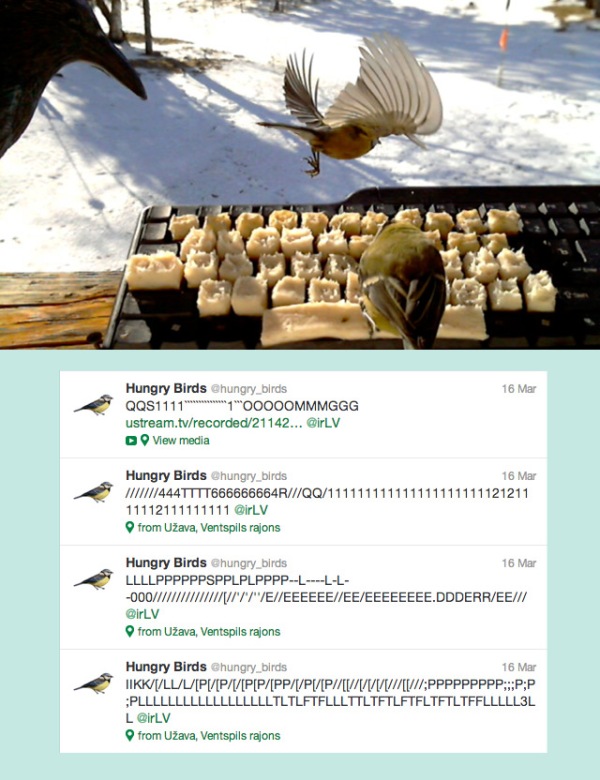 “Latvian conceptual artist and creative director Voldemars Dudums created this insanely clever bird feeder using an old computer keyboard and some cubes of bacon fat. When the birds would fly down to snack their inadvertent key presses were fed to an api that parsed each little tap into a bonafide tweet on the @hungry_birds Twitter account”